Today, there are concerns about the environmental affects of Syrian refugees on their host countries. In 2014, a Lebanon periodical quoted the Lebanon Environment Minister Mohammed Machnouk saying at a conference, “We are living in a state of environmental emergency… because of the Syrian refugees who have exceeded 1.5 million over the past years….We are really living in an environmental catastrophe… on the levels of solid waste, air and water pollution and sanitation, among others.”

The biggest impacts on host environments are usually:

However, in recent years the question is not just how are refugees affecting the environment, but how have environmental changes forced migration? Some people believe that climate change has fueled conflicts, such as the Syrian Civil War, which is creating more and more refugees. 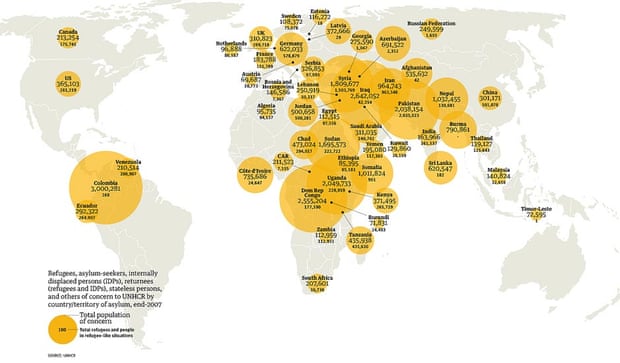 A recent study in the journal of Proceedings of the National Academy of Sciences suggested that one of the biggest factors that lead to the civil war was the intense drought they experienced that lasted from 2007-2010. The drought pushed farmers (about 1.5 million of them) into the cities to look for jobs and food. At the same time Iraqi refugees were migrating into Syrian cities, which lead to extremely overcrowded, poverty-stricken, stressful environments. The researchers made it clear that they do not think global warming caused the war, but was rather helped the push the society over the edge.

Many researchers have gone so far to say that global warming has forced migrations because environmental changes (due to climate change) have made people’s homes unfit for living. While some think this is merely a prediction, climate refugee migrations are happening right now. CNN reporter John D. Sutter recently traveled to the Marshall islands, a place that is literally being sunken off the map. As global warming takes place sea level rises, and for a tiny island at sea level this spells disaster. In this video, islanders testify to the floods that literally floated their beds and pushed them out the door to the United States, as climate refugees.  In fact, over 10,000 of these islanders have already migrated to Springdale, Arkansas in search of jobs and education. Sources on this page